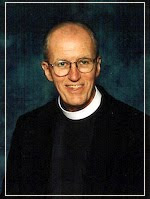 Click here to register for free childcare during our Advent mission.

Father Daniel Callam is a Basilian Father who is loved and admired by many in Houston and the surrounding areas. He graduated from the University of Toronto with a honors B.A. in mathematics and physics, and later received an M.A. in mathematics from Wayne State University in Detroit, Michigan. He studied for the priesthood at Saint Basil’s Seminary in Toronto, obtaining an M.A. in theology at the time of his ordination.

Later he pursued graduate studies at Oxford University, graduating with a D.Phil in theology. For twenty years he was an associate professor of religious studies at the University of Saskatchewan, before moving to the University of Saint Thomas in Houston, where he taught theology and also served as chaplain of the University. On returning to Canada, he assumed the post of curate at Holy Rosary Parish in Toronto. He is now in residence at Saint Michael’s College at the University of Toronto. For fifteen years he edited The Canadian Catholic Review and is currently assistant editor of The Chesterton Review, which is published from Seton Hall University in South Orange, New Jersey.