You are here: Home / Archives for What Catholics Believe

Join us Tuesday, September 29 — the Feast of the Archangels — for a special presentation about angels. Topics will include basic catechesis about angels, common misconceptions, devotion to your guardian angel, stores from the Saints, and more. The program will be held in the Community Center and begins at 7pm. Attendees will receive a free 5×7 icon (photo print) of an Angel. Arrive early! 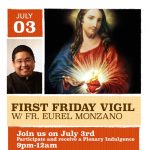 Join us on July 3 for our First Friday Vigil, led by our new parish Administrator, Fr. Eurel Manzano. While Fr. Manzano will not officially begin his position at St. Theresa until August 1, he will be here to lead our July First Friday Vigil. Receive a plenary indulgence by joining our community for this devotion.

The First Friday Vigil will begin at 9pm and last until midnight. The vigil will consist of:

What is the significance of First Friday and the Sacred Heart of Jesus for Catholics?

Devotion to the Sacred Heart of Jesus is a longstanding tradition among Catholics:

The prayer of the Church venerates and honors the Heart of Jesus just as it invokes his most holy name. It adores the incarnate Word and his Heart which, out of love for men, he allowed to be pierced by our sins.

– Catechism of the Catholic Church, Article 2669

How can devotion to the Sacred Heart bring us closer to Jesus?

Traditionally, there are twelve promises which Jesus made to St. Margaret Mary regarding those who devote themselves to His Sacred Heart:

What is a plenary indulgence?

“An indulgence is a remission before God of the temporal punishment due to sins whose guilt has already been forgiven, which the faithful Christian who is duly disposed gains under certain prescribed conditions through the action of the Church which, as the minister of redemption, dispenses and applies with authority the treasury of the satisfactions of Christ and the saints”. 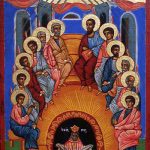 Pentecost Sunday is one of the most ancient feasts of the Church, celebrated early enough to be mentioned in the Acts of the Apostles (20:16) and St. Paul’s First Letter to the Corinthians (16:8). It is the 50th day after Easter (if we count both Easter and Pentecost), and it supplants the Jewish feast of Pentecost, which took place 50 days after the Passover and which celebrated the sealing of the Old Covenant on Mount Sinai.

The Acts of the Apostles recounts the story of the original Pentecost as well (Acts 2). Jews from all over were gathered in Jerusalem to celebrate the Jewish feast. On that Sunday, ten days after the Ascension of Our Lord, the Apostles and the Blessed Virgin Mary were gathered in the Upper Room, where they had seen Christ after His Resurrection:

And suddenly there came a sound from heaven, as of a mighty wind coming, and it filled the whole house where they were sitting. And there appeared to them parted tongues as it were of fire, and it sat upon every one of them: And they were all filled with the Holy Ghost, and they began to speak with divers tongues, according as the Holy Ghost gave them to speak. [Acts 2:2-4] Christ had promised His Apostles that He would send His Holy Spirit, and, on Pentecost, they were granted the gifts of the Spirit. The Apostles began to preach the Gospel in all of the languages that the Jews who were gathered there spoke, and about 3,000 people were converted and baptized that day.

That is why Pentecost is often called “the birthday of the Church.” On this day, with the descent of the Holy Spirit, Christ’s mission is completed, and the New Covenant is inaugurated. It’s interesting to note that St. Peter, the first pope, was already the leader and spokesman for the Apostles on Pentecost Sunday (see Acts 2:14ff).

In years past, Pentecost was celebrated with greater solemnity than it is today. In fact, the entire period between Easter and Pentecost Sunday was known as Pentecost (and it still is called Pentecost in the Eastern churches, both Catholic and Orthodox). In more recent times, parishes celebrated the approach of Pentecost with the public recitation of the Novena to the Holy Spirit. 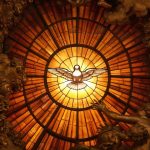 Who is the Holy Spirit?

From whom does the Holy Spirit proceed?

Is the Holy Spirit equal to the Father and the Son?

What does the Holy Spirit do for the salvation of mankind?

Sign up for the parish e-newsletter to receive announcements of special events, programs, and other parish news.